Follow this blog via e-mail HERE. Scroll down on the right after archives.

My first book ‘Johannesburg Then & Now’ is available at local bookstores or internationally via Amazon or kindle. Click HERE for the relevant links

In 2010, while planning for a new room/story to be built onto our house in Melville, I got to see the original hand-drawn plans from 1912. The house looked very different back then. What were the chances of finding a photo of what the house looked like around the time it was built?

Browsing through Bookdealers one day, I came across the big gold Johannesburg centenary book from 1986. It was cheap and full of photos, so I bought it in the ambitious hope that I may find something there. I didn’t, but what I read and saw in that book started my mild obsession of tracking down the last remaining houses, buildings and other landmarks from old Johannesburg that still existed and showing a then & now comparison where possible. What’s turned out to be even more intriguing is discovering and cataloging what has been lost. Johannesburg is a big place, so I decided to break the research up by suburb, starting with the oldest and working my way through them over time.

There are several books available that cover what I’m doing in varying degrees, but I believe I’ve found a few gaps that others have missed or overlooked. Also, many of the reference books I collect and use are out of print and have amazing information within their pages. I try to bring these fascinating facts together in each post along with new work by contemporary researchers, architects and historians. As such, this blog is a work in progress. I update old posts and add new photos and will start dating the new additions at the end of each post.

UPDATE (June 2018): This mild obsession turned into a book deal. Penguin Random House approached me in late 2016 to author ‘Johannesburg Then & Now’ based on the existing Cape Town edition. 18 months later, the book is finished and will be out in October 2018 at book retailers countrywide.

The other reason for doing this is that while uncovering the history of Johannesburg through these books, I came up with the skeleton of a fictional story that I’m busy assembling that will eventually become a graphic novel (type of long-form comic) or a film script. These pictures will additionally act as a reference for various scenes and places where the historically accurate story takes place.

Brief history on the discovery of gold on the Witwatersrand

The history of mining on the Witwatersrand is said to go back to as early as 1853. It was generally known that the Transvaal possessed great mineral wealth. In the 1860s, tin was being mined near Pretoria. Silver and gold were also discovered in small quantities but no proper research was done at the time. In 1870, a ten-carat diamond was found in Magaliesberg and it was reported that diamonds had been picked up on the road between Pretoria and Rustenburg.

Regarding gold, there were many early events that lead to the discovery of the main reef. It was not a chance find, but rather the final link in a chain of circumstances. Blaauwbank (a farm in Magaliesberg) and Struben’s Reef or Confidence Reef (on the farm Wilgespruit) were two early mining areas that were worked in the hope of striking it big but didn’t deliver. It was only in December 1885 that the first public diggings in the Transvaal were proclaimed. This was on the farm Kromdraai, but unfortunately, it followed the course of others. The Kromdraai discovery did direct attention to the possibility that the continuation of the gold-bearing quartz reef could be found on adjoining farms. Towards the end of 1885, there were many discoveries on many farms, but most were unpayable, in that the amount of gold found per ton of rock was not financially viable to mine, or, that there was no gold at all. Of course, all the farm owners believed their land held great mineral wealth.

The above-mentioned farms were part of the District Pretoria. The farms where the main reef was discovered fell under the district Heidelberg under Landdrost F. K. Mare and Veldcornet J. P. Meyer. Numerous petitions were sent to the government to alter the Gold Law to allow farms to be opened for public diggings. The last few in early 1886 from various districts in the Witwatersrand were signed by 172 people.

Australian prospector George Harrison (along with George Walker) are recognised as the discoverers of the Witwatersrand goldfields. Gerhard’s Cornelis Oosthuizen, owner of a portion of the farm Langlaagte, gave the prospectors permission to search for precious minerals on his land in April 1886. On the 24th July 1886, Harrison declared that he thought the farm Langlaagte was a payable goldfield. 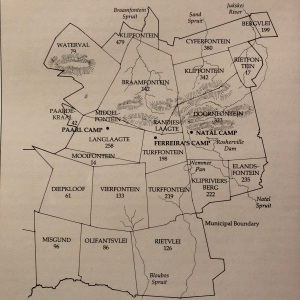 Randjeslaagte was a triangular-shaped piece of land running along today’s Commissioner Street from End to Diagonal and up to the top of Boundary road near the fire station in Berea on which the early township of Johannesburg was laid out on. The first mention of Randjeslaagte was in Mare’s report dated 9th July 1886 when he stated a license had been applied for on the piece of government ground.

From the map below one can see that Diagonal Street literally runs diagonally. It was originally called Jubilee Street (presumably derived from Queen Elizabeth’s jubilee in 1887) up to around 1909 according to printed maps. The diagonal section of street running next to Hillbrow, now known as Clarendon Place, was originally called East Ave and is just a continuation of Diagonal Street broken by the railway lines, Hospital Hill and the Old Fort. It changed its name from East Avenue to Clarendon Place on 6 May 1959 sometime after the old Clarendon Circle (gyratory traffic system at the intersection of Twist Street, East Avenue/Clarendon Place, and Empire Road) was converted into a regular intersection. MORE INFO HERE

Although confusingly referred to as a farm in the proclamation, this triangular piece of unclaimed land or ‘uitvalground’ sat between the farms Braamfontein, Turffontein, and Doornfontein. It was leftover ground from rudimentary and inaccurate surveying of farm boundaries and so fell under the ownership of the government. After some low-yield surface and trench mining, J. E. de Villiers laid out the 986 stand township with streets on the bottom (southern) section of Randjeslaagte for the digger community to live in November 1886. The first stands went up for auction on 8 December 1886 and the first wood & iron structures started going up by the 24th of December. It was not a popular choice of site as diggers felt it was exposed to too much wind, but was central and as it was owned by the government, all monies from the sale of stands, leases and licensing would be paid to the government and not private owners.

The base is now central Johannesburg and the apex is the top end of Hillbrow (which was surveyed later in 1894). Those sections of surrounding farms where no gold was found were sold off over time by their owners to land or estate companies. As the town’s population expanded they were laid out as suburbs with some parts retaining the original farm name.

It’s interesting to note that at the time of the discovery of gold, only 200 people were living on the 25 or so farms that now form part of Johannesburg. There is some dispute around this number because it was winter when gold was discovered, and many farmers moved with their livestock to their other farms in warmer areas of the Transvaal. An official record from July 1875 puts 281 people in the District of Pretoria. It’s safe to assume that the number would have grown in 10 years with all the talk of gold.

A beacon was erected at the Hillbrow (northern) end of the triangle. This was declared a national monument in 1965 and now has its own Heritage plaque.

Presumably, for the 2010 world cup, an updated mosaic beacon and mural were erected under the bridge at End Street. Older beacons did once exist for the Commissioner Street positions. I recently discovered a photo of the one at the corner of Diagonal (or West Street as indicated by Anna Smith) and Commissioner Street circa 1960

The beacon that once marked the south-western part of Randjeslaagte on the corner of Commissioner & Diagonal Streets (Source: Some Historic Drives & Walks of Johannesburg)

One thought on “Introduction and Randjeslaagte”

This site uses Akismet to reduce spam. Learn how your comment data is processed.